Learning from Icarus in 2022 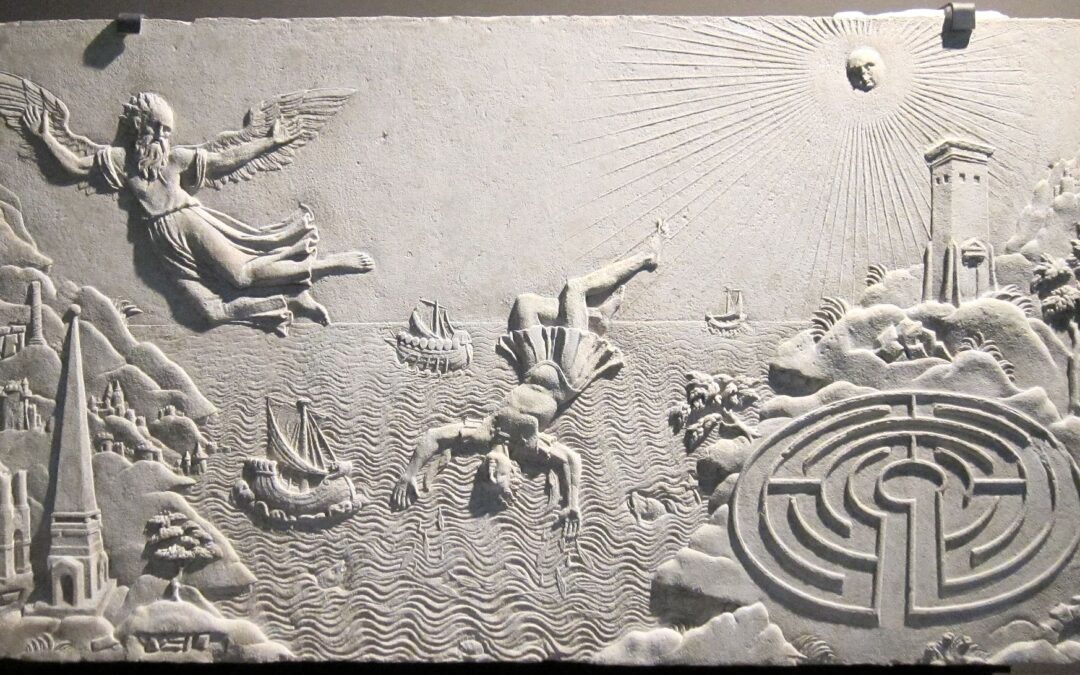 Witnessing the rise and fall of the patriarchy

As the ancient Greek myth goes Icarus felt overconfident to take his wax wings to fly above the earth. He chose to get closer to the Sun and his wax wings melted making him fall into the sea and drowned.

I see this as a metaphor for what’s happening in the world. The seemingly untouchable billionaire, elite class is acting on behalf of humankind to create the world they want to live in. In doing so they are demonizing anything natural as bad allowing for catastrophic change to occur for every human being living on Earth in 2022.

They use disease, viruses, and climate change as their weapons of mass distraction to keep us from seeing the real picture of an engineered, calculated, and manipulative propaganda machine. They are intentionally forcing the public to agree to things that were unthinkable two years ago. They behave much like Icarus planning and developing the future of the planet for their own gain, more often than not against the people and inhabitants of our entire planet.

How can ‘We the People’ in America anyway allow the elite alone to determine our future for their own private gain?

The myth of Icarus is a foreboding narrative for them. Mother Earth and the feminine always has her ace in the hole. We need her more than she needs us. You could view human greed as a pestilence upon this beautiful Earth.

The Hopi tribe in the American southwest has the Prophecy Rock with petroglyphs that were carved into an ancient stone many moons ago. What’s interesting it shows two timelines the bottom timeline is a simple man growing food and planting corn on Mother Earth to supply him with sustenance to live on for generations. Above him there’s an etched stairwell arching up to the heavens at a 45-degree angle. At the top there’s a stick figure man falling off the top step beheaded as he falls to the ground.

The Hopi view this as mankind’s technological, transhumanist goals will lead to his suicidal demise. Much like Icarus flying too high close to the sun as his wax wings melted and plunged him to his death by drowning in the ocean.

It’s the same metaphor for our modern age. The old and simple ways aligning with the natural order of our planet, her people seeing the beauty and abundance and everything the feminine and everything and the simplicity of thriving on earth in its perpetual garden of Eden is the best way to go. Thousands of elites, billionaire Icarus’ will determine their own fate as their artificial reality crashes. Is not real but their perception of controlling all life on Earth blaming natural cycles for our destruction when it’s they who are planning our demise for their personal gain. I hope all the people in the world wake up and see what’s happening which is no different than a certain German Chancellor who dreamed his Third Reich would last 1000 years which barely lasted 20. Yet again Icarus/Hitler flew too close to his Aryan Sun and fell to the ground.

It’s necessary to open your eyes if we’re to survive this artificial reality.

The elite use fear, propaganda and manipulation to enforce their will. Rosa Parks refused to sit at the back of the bus over 50 years ago. She stood up and said NO! I will not go to the back of the bus. This one peaceful act changed racial history in the entire United States. It’s not much different than Gandhi in India saying NO to the British Empire. Violence is not needed to attain what’s necessary humankind has to stand up and collectively say NO!

We have the power to create our own destiny.

Nature is with us all the way. Live in harmony with all that’s natural and we will win this transhumanist, scientific fight that’s occurring across the entire Earth. Our Native American brothers and sisters taught us to walk in beauty, gratitude, and reverence for being alive.

Ironically, the ancient Chinese TAO was wise beyond its years. My favorite quote in ‘The TAO te CHING’ is “the underdog always wins”! Today humanity is the underdog to our elite overlords. We ALL win by simply saying NO to what we don’t want and YES to what we do want. It’s that simple. Stand up and say NO! Once we do so we then have our YES! Collectively we can create the real world we want to live in.  All things natural will guide us rather than man-made ‘new world order’ making the entire Earth in their image which is not real. The inhabitants exist in harmony with the larger forces of LIFE! Maybe our overlords are doing this to wake us up to find our resolve? Bless them in their arrogance and ignorance as we stand tall then say NO!