All Oppression starts with Fear and ends in Violence

Humanity has a long history of oppressing every civilization and her people since time began.

But what few people realize is that oppression starts from the emotional root of fear. Most oppressors try to protect themselves with weaponry, policies, or beliefs to justify an illusion of power, but it is to combat their feelings of fear. Historically we see brutal enforcement against anyone or anything that they feel threatens them. It’s like fear on steroids! Often, it is fabricated or blatantly untrue ideologies believed to be real that feed into the fear.

Oppressors attempt to escape their fear by using violent or repressive perpetrator tactics that victimize others. But here is a curveball, oppressors including perpetrators are essentially fearful and weak. They need an illusion of strength (in their own minds) that in turn makes victims fearful or smaller. After 20 years of Ancestral Family Constellation healing, I find it bitter irony that the very victims who have to withstand the oppression are often spiritually stronger than their oppressors.

I’ve found that what is drastically lacking in most oppressive regimes or governments is courage.

Sure, well-armed soldiers in any battlefield may exude strength during battle skirmishes and often may exude courage. But the leaders who are sending soldiers into battle are often using violence and intimidation to simply to ease their own fears. They are not operating from an emotional root of courage, but of fear.

We are witnessing police brutality in America become the norm.

Daily we are watching as lives—many of them black—are being snuffed out by overzealous police teams. As we watch this play out on television, we are missing the root fear that is in play inside the psyche of the dominators.

I have an interesting Ancestral Family Constellation case of a black client that I worked with whose great, great grandmother saved her entire family’s life from being lynched by the KKK. My client today is alive because at the time, her great, great grandmother was only eight years old. Almost a century ago a group of KKK Klansmen came to their home to kill the entire family. They broke into their home and started to gather the family to murder them in a lynching party. The black mother was trying to protect her daughter from the KKK. Her daughter explained to the group that the man under the pointy white hood was the president of the local bank. She had recognized his voice while he was hidden underneath his assassination costume. She exclaimed mommy that is the president of the bank! Upon hearing these little girls unknowingly courageous proclamation the entire cadre of murderous KKK Klansman ran out of the house. Their fear of exposure made them never bother that family again. This in turn allowed that surviving 8-year-old to become this twenty-first century’s great, great grandmother. Her astute observation saved her entire family’s life in created four generations after that fearful night of being attacked by the KKK for a racist lynching party.

This real-life example shows us how all-consuming and dangerous the emotional root of fear can become when in the hands of the powerful.

As brazen as the KKK may look they’re operating with an emotional root of fear that results in behaviors that oppress and kill an entire family with children. Their fear is telling them that they must do this to re-establish a sense of safety and security.

So, who truly has courage? Is it the victims of the perpetrators in this case?

That 8-year-old little girl may have not even thought she was being courageous, yet her innocent observation saved her entire family and scared the perpetrators away. I ask you who has the courage and who is operating from an emotional root of fear? In most cases that I have seen, it is the oppressor who is operating from a root of fear, and the victim that is demonstrating courage—not the other way around.

The TAO has the statement that is very true:

Expand your thinking beyond blame with righteous duality. Try to see the bigger forces at work behind the oppressors in inside their perceived victims. I do not endorse either or wish harm to anyone. All I ask is that you take an expanded view of what is perceived as reality to what is going on inside the United States in the entire world at large as we speak.

Perhaps you have been the victim to an oppressor.

Perhaps this has left you with an emotional wound that you believe may never be repaired. May I invite you into a process called the honoring bow that I have found helps my clients honor their past and the things that happened to them, and release it from holding sway over their lives? I demonstrate it below as well as provide the link for you. 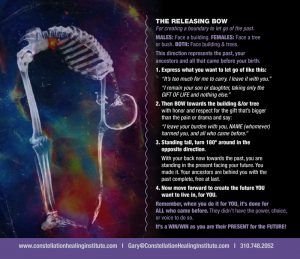